The play takes place in three bedrooms during one night and the following morning. The cast consists of four married couples. At the beginning of the play, the oldest couple, Delia and Ernest, are getting ready to go out for a meal to celebrate their wedding anniversary; Malcolm and Kate, the youngest, are about to host a housewarming party, to which the other two couples, Jan and Nick and Susannah and Trevor (the only ones whose bedroom is not seen), have been invited. At the last minute Nick has hurt his back and is unable to go. The complicating factor is that Jan used to be Trevor's girlfriend, and after Susannah and Trevor have a blazing row, Susannah finds Trevor kissing Jan. As a result Susannah leaves the party and goes to visit Delia and Ernest, whose connection with the rest of the plot is that they are Trevor's parents; she ends up sharing Delia's bed, while Ernest is forced to sleep in the spare room. Meanwhile Trevor himself, feeling unable to go home, is also offered a bed in a spare room by Kate, but decides to go and "straighten things out" with Nick and Jan, leaving Kate waiting up for him. Eventually Trevor and Susannah seem to be reconciled, but the end of the play leaves the audience very doubtful about whether this state of affairs will last. 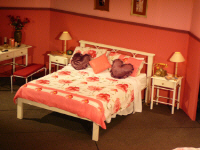 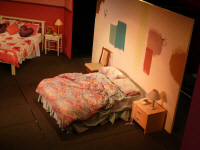 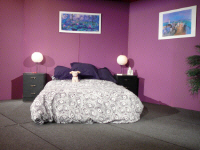 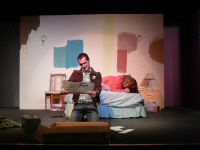 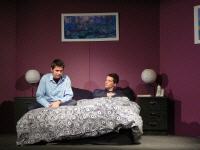 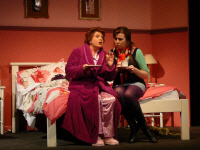 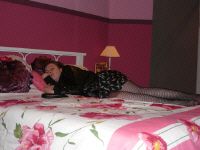 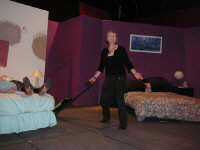 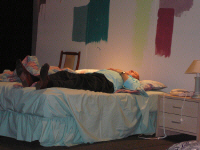 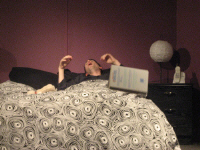 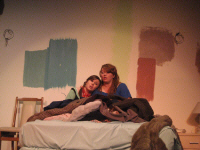 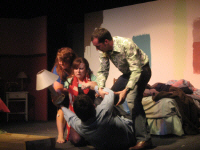 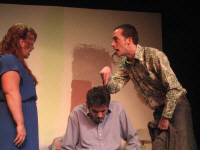 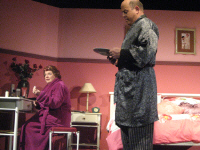 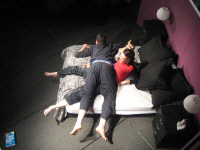 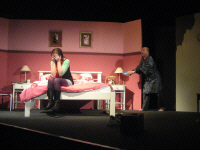 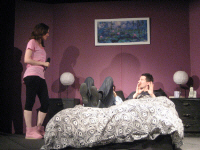 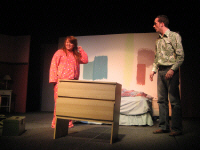 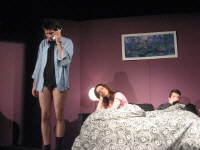 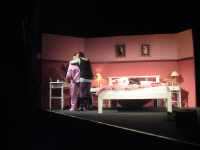 Galleon Theatre's 20th annual season is off to a flying start with Alan Ayckbourn's Bedroom Farce, a fast-paced, witty piece about four couples at different stages of their relationships.
Ernest and Delia, older, conservative and set in their ways, have a distant concern about their son Trevor and daughter-in law Susannah. When Trevor and his ex, Jan, meet at a party, one mishap follows another, and the farce is on.
As Ernest and Delia, Peter Smith and Lindy LeCornu have great fun, Ernest an uncongenial bore, and Delia a buoyant snob with just a hint of Hyacinth Bucket! Trevor and Susannah, both difficult roles, are handled adeptly by Ben Brooker and Amy Hutchinson, though the former needs to keep the puzzled looks in check.
Jan (Nikki Gaertner) and Nick are the with-it couple of the enterprise, and Christopher Eaton's account of the dry-witted executive consigned to bed with bad back is delicious. So too is Lee Cook's would-be chick magnet Malcolm, with Mr Bean-like agility and silly faces to boot. Sincerity pours from Kate (Jamie Hibbert), Malcolm's partner, an absolute sweetie.
Bedroom Farce is set firmly in the 1970s, and Trevor's violence towards Susannah, while handled well and returned in full and rollicking measure, drew not laughter, but sharp intakes of breath. Director Kym Clayton's decision to leave the setting alone is accordingly a wise solution.
Reviewed by Peter Burdon

If you see only one bedroom farce this year, make sure that it's Galleon's latest offering - but it is not of the "Oops, Vicar, I've dropped me knickers" variety.
Alan Ayckbourn's "Bedroom Farce" is a sophisticated comedy of everyday manners and the complications that arise out of the most ordinary of life's minutiae. Set in three bedrooms and taking place over the course of one evening, the play is probably one of Ayckbourn's more popular and accessible works.
Each bedroom, as designed by Steve Kelly, cleverly defines its occupants' relationships: the solid, traditional, but with a few damp patches marriage of Ernest (Peter Smith) and Delia (Lindy LeCornu); the stylish, comfortable, but with a few bread crumbs life of Jan (Nikki Gaertner) and Nick (Christopher Eaton); and the messy, never quite achieved relationship of Malcolm (Lee Cook) and Kate (Jamie Hibbert). A fourth couple, Trevor (Ben Brooker) and Susannah (Amy Hutchinson), wander around as aimlessly as their marriage, to and from each bedroom.
The programme notes from director Kym Clayton state that this is the third time he has directed this play and that it is one of his favourites - the excellent end result is glowing testimony to these two statements.
This production is almost flawless - from the well paced, realistic direction, the great set, Ray Trowbridge's deftly handled lighting design and Sean Smith's very workable sound design through to the wonderful cast.
If one had to find something to nit pick about in this production, it would be that an overcoat that is meant to be too big for an actor, isn't. If only one tiny inconsistency can be found in an amateur production, it speaks volumes for a bright future for Adelaide community theatre.
So, one night, before going into your bedroom, visit the three at the Domain Theatre - but hurry before this Galleon sails away.
Reviewed by Brian Godfrey 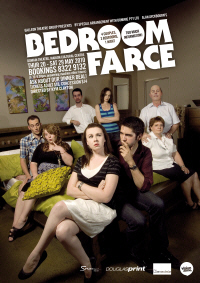 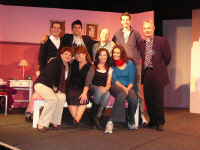 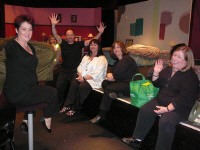