AUTHOR of 21 plays, Frank Vickery, exposes the human condition through comedy, creating warmth and empathy for his very real characters. Biting the Bullet follows Beryl, whose husband leaves her for a younger woman after 32 years of marriage.

AUTHOR of 21 plays, Frank Vickery, exposes the human condition through comedy, creating warmth and empathy for his very real characters. With a great appreciation for Vickery's style, Kym Clayton launches Galleon Theatre Group's new home at the Domain Theatre with a champagne production.
Biting the Bullet follows Beryl, whose husband leaves her for a younger woman after 32 years of marriage. Wendy Mildren's tremendous portrayal, though a little shaky to start with, takes the character on a powerful journey from dependent spouse to independent woman.
By her side is Susan Oldknow, playing well-meaning neighbour Dawn. Oldknow has the funniest lines and delivers her foot-in-mouth character with much compassion.
Beryl's lascivious daughter Angie, who joins the fight to rebuild her mother's life, is delightfully realised by Shelley Crooks.
The accidental arrival of a young, hunky gardener in the shape of actor Paul Bellman, proves to be the turning point for Beryl, and Bellman's understated performance offsets the others nicely.
Rounding off the cast is Chris Snape as Beryl's husband Ted, whose own journey of discovery proves equally as difficult.
While lacking the depth needed to do the character justice, Snape succeeds in being the pathetic male stereotype that kept the females in the opening-night audience nodding knowingly. Clayton's direction zips along, bringing all the subtle nuances out of the script and adding plenty of comedy business.
Stan Fairfield's box set is suitably neat and homely.
My only gripe is that the actors perform with Australian accents, which doesn't quite work when the British characters discuss jetting off to European countries at the drop of a hat. This otherwise flawless production looks set to lead the company into a bright new future.
Review published in Guardian Messenger 24-4-02, p. 43.
Reviewed by ROD LEWIS 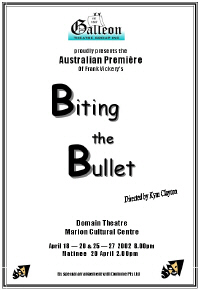