This production is set in the country house of Walter & Ceilia Bryce. Walter and Ceilia have endured their marriage for a number of years and hire the services of a professional suicide merchant to bring their less than happy union to an end. This doesnt sound like the stuff of a comedy but insert several mistaken identities, injured rubber plants, a Samaritan and a measure of infidelity into the mix and it is the recipe for a good chuckle.

Eric Chappell's Natural Causes is a black farce about Walter Brice who contracts Exodus, professional suicide merchants, to help his wife Celia commit suicide, something she has been threatening to do for some time.
Vincent, the man from Exodus, almost administers poison to everyone but the intended victim, and Walter's favourite rubber plant suffers the consequences through the course of the play.
The talented Andrew Clark takes on the role of husband Walter and holds his character throughout the show. Carolyn Conroy, as his wife Celia, comes into her own in Act II, when she seems to find a solution for her depression. The other cast members cope less well with their roles and their lines. As Exodus representative Vincent, Jerry Zimmer is a little uneven with an accent that wavers too often. Sophie Yelland, as Angie, and Gene Prigent, as Withers, seem to suffer from a lack of direction in their roles and therefore fail to get some of the laughs that they should.
The direction fails to make the most of the comedy, and needs to focus more on pace and comic timing. As a result, some moments in the show which should bring the house down, come off as merely mildly amusing, and the whole thing seems to drag.
The stage set, designed by Bruce Mildren, is the book-lined study of Walter's house, with the progressively dying plant placed prominently upstage centre. This is well suited to the stage at the Marion Cultural Centre.
A few more performances should see the pace improve, but on opening night it was slow going.
Reviewed by SIMON SLADE

WALTER used to love his wife, Celia, but it is hard to keep loving someone whose main aim in life is to end it all. Particularly when she wants him to end it all with her!
Besides, Walter has a new love, his secretary, Angie. He could just leave Celia, but he's too much of a wimp and his lovely house and lifestyle depend on her money. So Angie calls in a professional, Vincent of "Exodus" (a do-it-yourself death service) to facilitate Celia's transition into the next world. And that's where the nonsense begins.
This semi-farcical black comedy is based around a good idea but would probably work better as a one-act play. The first act is slow and laboured and a bit repetitive, and the actors need to travel at lightning pace for it to work effectively. The second act is where most of the fun begins and where most of the laughs happen as the action accelerates towards the final obvious and well deserved twist.
Ironically most of the humour revolves around the humourless character of the suicidal Celia, Beautifully underplayed by Carolyn Conroy. She successfully resists melodrama and her deadpan portrayal gives rise to some of the best moments in the show. She is a great counterpoint to Andrew Clark's frantically neurotic Walter.
Clark has wonderful timing and total control of some difficult dialogue in this pivotal role.
Jerry Zimmer, as the strangely likable assassin Vincent, struggles at times with his lines but delivers an enjoyable, well controlled performance as the anti-hero of the piece.
Sophie Yelland, plays a nicely cool and calculating Angie while Gene Prigent blusters effectively as a good Samaritan with problems of his own.
Director Kym Clayton has laid a light touch on a fairly taboo subject matter to produce a stylish piece of living-room comedy with plenty of close calls and enough little twists and chuckles to keep you nicely entertained.
Reviewed by SUE OLDKNOW 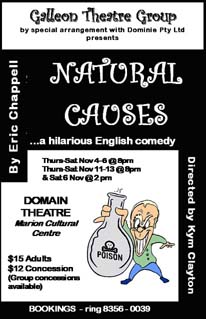