The time is the summer of 1981. The setting is the comfortable suburban Cincinnati home of the middle-aged 'Doc' and Delia Coleman on the morning of the wedding day of their eldest daughter Courtney. They are very anxious as they complete arrangements for the wedding that they are about to host in their garden, and Delia intends it to be the lavish wedding she never had.
The independent Courtney is an acerbic, successful New York based writer, whom no one would have expected to have a traditional wedding, if she were to marry at all. Her fiance Harper is handsome, sweet natured, polite, mature, focused, spotlessly groomed, apologetic even in the most stressful of circumstances, considerate and helpful to a fault. In fact he is a boring, discomfortingly stuffy Midwest Republican. On hand for the nuptials are Courtney's single sister, the sexually aggressive, drinking and drugging Melanie who hits the liquor cabinet upon her return from her nursing shift at the hospital, and their teenage sister P.B., who, as the play's narrator, is the purveyor of nostalgia for '80s pop music and culture as she nimbly dances about to the tunes on her Walkman while she performs her chores.
The situation around which the entire play revolves-the 'slight hitch'-is the unexpected arrival from New York of Courtney's ex-boyfriend Ryan, who is also a writer. Their three year long relationship ended when Courtney decided that she couldn't marry him after all. He is shocked that she is getting married so soon after their break-up, and he would not leave even if his only clothes were not in the wash.
The script abounds in in snappy wisecracks and keen social observation, and is reminiscent of Neil Simon.
This will be a South Australian premiere.

Director Kym Clayton made a great decision when he decided to choose the edition of this script that was rewritten for British audiences - it works so well. Couple this script with Clayton's stellar cast and you have something special.
Galleon presents the Australian premiere of 'One Slight Hitch' by American comedian and playwright Lewis Black. The play, set in Cincinnati, Ohio, was written over a thirty year period and is a traditional romantic farce with none of the dark and acerbic comedy Black is known for. He has said that if his name was not on the play few would realise he was its author.
The play centres around Courtney, the eldest of the three daughters of Doc and Delia Coleman, and her wedding day to Harper, a perfect but dull man bound to make Courtney content and unsatisfied. Not surprisingly, she is having second thoughts even before her ex-boyfriend Ryan turns up. He is quickly hidden from her, leading to the inevitable exquisitely timed door-slamming routines this kind of farce is renowned for.
There are plenty of laughs from the witty dialogue and chaotic situations, which are deliberately over-the-top and unlikely. The characters are a motley bunch: the kind of people matriarch Delia says are a great argument against gun control, because she would shoot the lot of them.
Maxine Grubel has a ball as Delia, especially in the second act when she finds her way into her doctor husband's pill collection to find something to calm her nerves. She is frequently hilarious, and her long speech on her generation and its eagerness to recover from the war and build a new society with the smell of death replaced by baby powder, is one of the highlights of the play. She is well matched by Andrew Clark as Doc, who is very believable as the only man in a family of women as he cavorts around the stage with great energy and plenty of booze, trying (and failing) to keep things calm.
Molly McCormack does well as Courtney, the published author who is about to marry Harper, mainly because he proposed to her nicely. McCormack brings out the conflict in the character between the successful liberated woman and her conservative upbringing and family. Laura Antoniazzi is a particular standout as the bubbly and energetic youngest daughter, P.B., and Megan Langford is great as the rather crazed sexpot middle daughter Melanie.
Director Kym Clayton has kept the timing tight and brought out the best in this talented cast, but there are a few weaknesses in the play. There seems to be no particular reason, for example, why the youngest daughter, P.B., should be looking back to the 1980s instead of the play just being set in the '80s, as the time shift adds nothing. The motivations of some of the characters are also unclear. Ryan particularly seems to have no reason to be there and spends his time vacillating between wanting to stay and go. But none of that really matters as it is, after all, a romantic comedy and not a deep, dark and meaningful drama.
The actors all do an outstanding job with the material, and they extract every bit of comedy in the piece. The set is excellent and the technical aspects went off without a hitch on opening night. This is a fun play with lots of laughs, and is well worth seeing.
Reviewed by Linda Edwards

Ahh! Weddings - the day of days; the holy of holies! But, unfortunately, disasters can occur, especially if the bride-to-be's ex-boyfriend arrives upon the scene. This is the premise for Lewis Black's comedy, One Slight Hitch.
The one slight hitch with the script is that it can't always decide which road it wants to travel. Although primarily a situation comedy/farce, Black occasionally adds socio-political comments into the mixture; this added spice is not needed (especially the mother of the bride's huge Act Two monologue). However, it does not stop Kym Clayton's production for Galleon from being excellent.
Placed on a well-dressed set that makes the small Domain Theatre stage look large and spacious, Clayton presents us with a multitude of well-timed comic moments that just zing along, performed by a sterling and extremely strong ensemble - all with impeccable American accents.
Andrew Clark and Maxine Grubel seem as if they were meant to be married in real life, so perfect are they opposite one another. Both actors have their 'high' points in the play: Clark with his drunk scene and Grubel relishing her character's tranquilizer-induced calmness.
As the three daughters of the piece Molly McCormack is perfect as the soon-to-be bride; Megan Langford is a scream as alcoholic, sex-mad Melanie; and Laura Antoniazzi is a sheer delight as young, effervescent PB.
As ex-boyfriend, Ryan, Jabez Retallick exudes a nice combination of youthful cockiness and rough-edged likability. Luke Budgen is wonderful as the nerdy, ineffectual, intellectual groom-to-be.
One Slight Hitch is yet another in a long line of fine productions presented by the Galleon Theatre Group.
Reviewed by Brian Godfrey

There's not a hitch or a hiccup in Galleon Theatre Group's Australian premiere production of Lewis Black's wedding day farce, One Slight Hitch. Set in the 1980's in a middle-class American household, the characters in the play are deliberately portrayed as larger-than-life, which fits the chaos and improbable scenarios that beset them. Three young adult daughters all live at home with parents Doc and Delia Coleman and on this day, middle child Courtney is to marry dull and nerdy Harper following an unsuccessful relationship with Ryan, a free-thinking drifter. Does the ending seem predictable? Well, it's not, at least for me; not until nearly the end anyway.
Laura Antoniazzi is absolutely delightful as the youngest daughter, teenager 'PB', who is also narrator of the story from her point of view. Antoniazzi is a fresh and fantastic talent. Maxine Grubel is hysterically funny as the flustered mother of the bride, Delia Coleman. She increases the laughs with skill as her character becomes more and more substance-affected. Her scene with her daughters towards the end of the play when she poignantly describes her personal wedding experience is a highlight of her performance. Andrew Clark is a consummate comic actor and gives a performance that would hold its own in any good American Sitcom. He is wonderful as Doc Coleman, a man who loves his daughters dearly but who is always one step behind the pace when it comes to their shenanigans.
Megan Langford is hilarious as the worldly eldest daughter Melanie, who takes immense enjoyment from the chaos brought to her parents' household when her sister's (the bride's) former boyfriend Ryan arrives unexpectedly. As Ryan, Jabez Retallick is slightly out of sync with the acting style of the other performers. His approach is more subdued and naturalistic. He also needs more voice projection. Because of these minor issues he is not larger-than-life and doesn't quite carry off Ryan's radical, off-beat personality. As middle daughter and bride Courtney, Molly McCormack is fantastic, while Luke Budgen is very fine as the bridegroom Harper. Budgen is terrific as a man trying to ingratiate himself with the family of his bride.
Kym Clayton keeps the energy and pace at full throttle. This experienced director is clearly completely at home with the difficult art of successful farce. The set is up to the high standard audiences can always expect from Galleon, as is Judy Rogers' attention to detail in the dressing of it. Sound and lighting are also very good, while costumes and eighties hairstyles are well-researched and executed.
Feel free to sit back, laugh and relax and know there's a fun time in store from Galleon's production of One Slight Hitch. Not too many 'wedding days from Hell' could upstage this one.
Reviewed by Lesley Reed

Galleon Theatre Group Inc is a wonderful community theatre group who consistently produce shows of excellence. Their current production of Lewis Black's One Slight Hitch in the Domain Theatre at Marion is no exception. Kym Clayton has assembled a cast of talented actors to bring this Australian premiere to life. The trick in preventing a farce from becoming unbelievable is in creating characters that are larger than life, involved in somewhat ridiculous situations, but still endearing to the audience. Kym's direction of his cast and their obvious talents definitely achieve this, demonstrating complete understanding of Lewis Black's writing intentions, so that we as an audience are able to relate to them.
The set is true to a 1980s middle-class suburban household. Judy Rogers is to be commended for her attention to detail in dressing the set, as is Ronda Shepley for her co-ordination of costumes true to the era. The eldest daughter, Courtney, is about to get married and everything is in readiness until Courtney not only has second thoughts but has not one, but two, prospective husbands - both of whom are present - thus causing 'One Slight Hitch'. Overall I felt the cast were flawless but I particularly loved Maxine Grubel as Delia, who became more and more delightful as the effects of the Valium and alcohol took over. Andrew Clark as Doc was also superb as the doting, but clueless, husband and father. Definitely one not to miss. Give yourself a treat and get along to the Domain Theatre to see One Slight Hitch. It's a hoot!
Reviewed by Janice Bailey 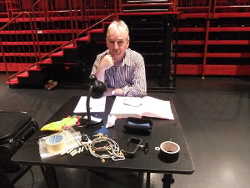