It is the night of Michael's and Roma's fancy dress house-warming party. The evening looks set to be a lively one until a string of hilarious disasters strike, including a distinct lack of guests, a burning garden shed, a marauding Zimmer frame and the prospect of an irate husband on the prowl. Michael's and Roma's patience is further tried by the arrival of their neighbours, the indomitable Mrs Hinson, who brings her own brand of party entertainment in the form of the domestic squabbles of her son and daughter-in-law. This is a fast-paced and very funny play packed with action and set in the back gardens of the feuding neighbours.

Kym Clayton's director's comments in the programme note that "Party Piece is not a complex play. It has no deep and meaningful messages and nor does it require one to ponder life's mysteries" should be taken as fair warning.
The action is set in adjoining back yards. Dr Michael Smethurst (Damien White) and his wife Roma (Kerry Cooper) are new arrivals to the neighbourhood, and, like all the other new arrivals to the neighbourhood, have been busy renovating. They have planned a housewarming party for tonight, but have not yet warned their elderly neighbour, and one of the original occupants of the street, Mrs Hinson (Mollie Birch).
Meanwhile, across the fence, Mrs Hinson is hanging out her washing. Her garden and house are old and well lived in but a little run down---like the old lady herself. She is joined by her son, David (Andrew Clark). With the later arrival of David's second wife, Jennifer, played convincingly by Carloyn Conroy, it becomes apparent that there is an underlying reason for David's visit.
On opening night, Birch seemed unsure of her lines and Cooper, though showing some great visual comedy, delivered all her dialogue in the soprano range, making it difficult to understand. The flow of action from one yard to another was not always smooth, but these problems should improve as the season progresses and the actors relax into their roles.
White fares well as the social climbing doctor, with Cleese-like mannerisms. Clark also gives an entertaining performance, his voice was reminiscent of Michael Palin's "Arthur Putey" in Monty Python's Marriage Guidance Councillor sketch.
The pace picked up in Act II with the arrival of the only two guests, Toby Hancock (James Spargo) and Sandy Lloyd-Meredith (Alison Bowman). Bowman was particularly good, though her sports top was out of place with the rest of her costume.
The minor problems with the production were overshadowed by the blandness of the script. Gags that didn't work the first time kept coming back for a second and third try. There were some laughs, but they were few and far between.
Reviewed by THERESA DOLMAN

THIS is one of those lovely little English situation comedies where you don't know whether to laugh or to cry.
A well constructed set situates the play in the tiny back gardens of adjoining terrace houses, where the audience gets a sneaky peek into the lives of two very different sets of people.
In one house lives a little old lady, Mrs Hinson (played with great relish and understanding by Mollie Birch). She is enjoying an unexpected visit from her son and daughter-in-law.
In the other live a doctor and his wife, part of the new breed of property buyers, moving into working class houses, and 'gentrifying' the old terraces. They are organising a house warming barbeque.
It isn't long before these two very different families begin to interact and that's where the fun begins. This isn't laugh-out-loud comedy. It's more that kind of nervous reaction you get when you know you shouldn't laugh because it's really quite sad, but you just can't help yourself.
Mrs Hinson isn't very nice. She's the manipulative martyr type. She loves to bait her new daughter-in-law (the very dry and controlled Carolyn Conroy) and molly-coddle her son. She has turned son David into a charming wimp who avoids any confrontation with his mother by clowning around. Andrew Clark is excellent in the role, sweetly funny, warm and vulnerable. I don't think the playwright, Richard Harris, likes doctors very much. The role of Dr Michael Smethurst is quite nasty. He's mean with money and mean to his wife.
Damien White is doing an excellent job because you really hate Michael.
Kerry Cooper is wonderful as his sweet little wife Roma, trying so desperately to please in a situation that is deteriorating by the phone call.
Party guests are bailing like rats on a sinking ship and the only two who do turn up are an opportunist, out for a free feed and a nymphomaniac housewife on the prowl (played nicely by James Spargo and Alison Bowman).
This is a play that depends upon quick exits and entrances, spot-on sound effects (well done, Sean Smith) and perfect verbal and physical timing for its greatest comic effect.
Director Kym Clayton has put this Party Piece together very well and as the season progresses and the action tightens up it can only get better.
Reviewed by SUE OLDKNOW 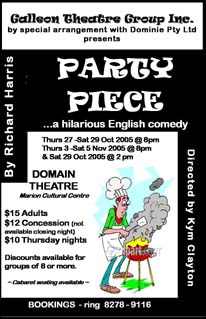