It hasn't been Griff's and Ruby's day, really. Griff has discovered - in the most dramatic fashion - that their son Nigel is not only a drag queen but gay; hours later, Nigel is in hospital having been hurt in a car crash in which his lover, Kevin, has incurred much worse injuries.

Robust, sensible Ruby has much to deal with - Nigel's fears, Griff's prejudices, her own confused emotions - and has to use every resource at their disposal to keep the peace, especially as, for the first time, she and Griff are face-to-face with their "in laws", Kevin's parents Rita and Vernon.

Many secrets raise their ugly heads and many harsh words are spoken in between the hilarious one-liners before this sharp yet compassionate comedy reaches its bittersweet conclusion.

A Brit sit/com with a difference as two families discover that their sons are gay lovers.
Vickery's plot sets the show in hospital after a car accident caused by an argument between the young men.
Parents and nurse come and go , providing a multitude of conversational combinations on rights,wrongs, morality, responsibilities , the whole complicated mess leavened by considerable broad humour .
Star turn is Nigel (Alex Bond) , ruling the roost from his bed , vamping and ranting in high camp style eager to break into a Shirley Bassey number at the drop of an eye lash. Bond has considerable talent and brings a range of shades to the part , exposing fearful vulnerability behind brash facade.
His boyfriend we never see but hear much about as blame game takes over from worry.
Neither writer nor directors offer any solutions to the many questions set floating but the varied responses of each character allow audiences ample space to re-inforce or change attitude.
Nigel's father Griff ( a finely tuned performance by Peter Davies) initially rejects the entire concept of a gay son whilst his wife Ruby openly accepts , almost rejoices in, the boy's happiness and talent as a drag queen. Lindy LeCornu handles the mother's role with subtlety ,coaxing and badgering her husband , reminding him of past friends and their own tangled courtship. Andrew Clark and Joanne St Clair as the other parents have their own guilty imbroglios to juggle , unfortunately neither performer as perceptively as Davies and LeCornu. Charlotte Archbold paints a very one dimensional nurse.
A well handled production which clearly engaged the big audience judging by the eager discussions over interval drinks at the cabaret tables.
Reviewed by RUSSELL STARKE

There's been an accident. Nigel (Alex Bond) is in hospital and his Mum and Dad are in the corridor waiting to visit, and that is where the play and the games begin.
So Ruby (Lindy LeCornu) and Griff (Peter Davies) discuss the father/son relationship and the events of the previous Saturday night and wait to be allowed to visit. "Roots and Wings" has a well written script, cleverly delivered by an excellent cast.
Full marks to Andrew Clark and Kerry Cooper, the co-directors, who make very good use of Steve Kelly's practical set design and bring out the best in their cast. Clark has the added job of stepping into the role of Vernon, the father of Nigel's love interest, a task which he accepts with his usual aplomb. Vernon's wife Rita, played by Joanne St Clair, is a strong character and St Clair gives her the depth needed. Charlotte Archbold, as a nurse popping in and out of the action, hits just the right note.
LeCornu and Davies show their considerable talent in the first scene, establishing well rounded characters and developing the comedy. Bond, appearing in what, on the surface, is a non-singing role, gets off to a shaky start, but soon settles and finishes the Act with a song! His very good voice battles a recording which intrudes too long, but this is a minor irritation.
"Roots and Wings" is a good ensemble piece with strong performances and solid production values which we have come to expect from Galleon. It's a comedy with a message, dealing with the difficulties facing parents coming to terms with their child's homosexuality but it also looks at the secrets we keep, and we all keep them.
Well worth the trip to Marion!
Reviewed by Fran Edwards

Welsh playwright Frank Vickery's comedy was first produced in 1995 but the attitudes and naivety are from a much earlier time. Or maybe it's the culture of the location.
Set in a hospital waiting room and ward, parents Griff and Ruby visit their son Nigel who's had a car accident with his partner Kevin. Only days earlier Griff discovered Nigel is not only gay but a drag queen, in a dramatic fashion. Kevin's parents Vernon and Rita have their own problems.
The many secrets, coincidences and the well used swinging ward double doors, head this old English comedy towards farce.
Directors Andrew Clark and Kerry Cooper brought this story to life with professionalism. The scenes occurring simultaneously were mostly seamless; although some lines were fluffed; and slowing the pace a tad would have been less confusing for the initiated.
The simple set was well designed by Steve Kelly and constructed by many.
Lindy LeCornu was superb as sensible Ruby, with perfect comic timing. Her stalwart husband Griff was played by Peter Davies with great authenticity. I could imagine him heading off to start afternoon shift at British Rail after the show. Alex Bond as gay drag queen Nigel managed just the right amount of 'over-the-top' from his hospital bed (ironically he was actually sick with a cold). Andrew Clark and Joanne St Clair were perfectly matched as Kevin's troubled parents Vernon and Rita. Charlotte Archbold managed her nursing duties and those swinging doors very well.
A good all-round comedy with dated attitudes.
Reviewed by Kerry Edwards

Contemporary set design promoted the contiguity of the stoic parents in scene 1, and enabled the continuity of the play to be well paced. Frank Vickery's play about 'coming out' is humble and poignant, dignified and resilient in spirit, qualities the cast embodied faithfully.
Ruby the loyal mother, played by Linda Le Cornu, is valiant with the verbal velocity to penetrate the father's obstinate cocoon. Griff, the father played by Peter Davies is a machismo bloke concerned about ridicule from work mates. Meanwhile, Nigel, the homosexual young son played by Alex Bond, is appalled to find himself swindled out of sympathy for his near death experience by everyone's issues. Even his good friend Vernon, played by Andrew Clark, wants to 'dry clean his skeletons'. and none of this helps Nigel to come to terms with the seriousness of his car accident.
There were stronq performances by seasoned actors. This was Alex Bond's first foray into the theatre from the Gilbert and Sullivan Society, His character's denial and youthful filtering of follies was entertaining and believable.
Reviewed by Carole Steyenson

FRANK Vickery's play about parents dealing with their own imperfections as they come to terms with having gay sons takes a humorous path towards a universal message.
Vickery has created four stereotypical parental characters and an interesting dramatic structure which switches through an overlay of simultaneous time in the ward and corridor of a British hospital, where female impersonator Nigel is recovering from a car crash. Nigel's father is having trouble accepting that his son is a gay entertainer, while Nigel's partner's parents are juggling secret shames.
Nigel's gushing mum, on the other hand, is a middle-aged Pollyanna and essence of loyaty and acceptance is played by Lindy Cornu a la Michelle Doctrive in Some Mothers Do Ave 'Em- high, lilting and exaggerated in accent.
Nice for a character without too much dialogue but Vickery has over-written the first two acts and mum does go on. Dad obviously has less to say but Peter Davies, in a beautifully-contained performance, lifts him to a lovely working class credibility. Andrew Clark and Joanne St Clair develop the other parents competently, too, as does Charlotte Archbold the sympathetic nurse.
Young Alex Bond as the hospitalised drag queen steals the show in all directions. He is as touching as he is sly and outrageous - a tough call when you have to do the whole characterisation from bed.
Directors Andrew Clark and Kerry Cooper could have clipped back some of the repetitive message but the production is strong, showing Galleon remains a solid and serious community theatre group.
Reviewed by Samela Harris 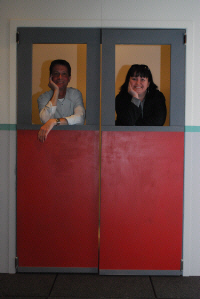