This riotously funny farce centres on the efforts of eight party guests to spare their unfortunate host, and themselves, from scandal.
It opens with Ken and Chris who have found their host Charley, a prominent Government official, in his bedroom, too dazed to speak, with a bullet wound in his ear lobe! His wife, Vivian, and a domestic help are nowhere to be seen.
Len and Claire arrive, themselves injured in a car crash, and are soon joined by Ernest and Cookie and Glenn and Cassie, each with their own problems.
Following a second, accidental, gunshot that leaves Ken temporarily deaf, the police arrive. Len, drawing the short straw, pretends he is Charley and concocts a touching and fantastic explanation
The action of the play takes place in the living-room of a large house outside London on an evening in May.
Time: The Present
ACT I - 8.30 p.m.
ACT II - Later that night

Director Kym Clayton made a great decision when he decided to choose the edition of this script that was rewritten for British audiences - it works so well. Couple this script with Clayton's stellar cast and you have something special.
Farce only really works when the characters remain believable no matter how improbable the situation becomes. With skillful writing Neil Simon has given them the tools and these actors bring us the best of their craft.
Peter Davies, well known for his work with many companies around Adelaide, plays Ken the first of Vivienne and Charlie's guests to arrive. The 10th Anniversary dinner has been well planned but we never see the hosts, what has happened? Fearing that Charlie may have attempted suicide Ken (Peter Davies) starts the web that will grow into a morass and trap them all.
Davies carefully stays on the right side of believable whilst finding himself in the most outrageous situations. As his wife Chris, Anita Canala, panics and tries to help they are joined by Len, Andrew Clark, and his wife Claire, Linda Lawson. Having just had an accident Len is already agitated and soon becomes more so. Canala and Lawson play two of the best female drunks I have seen, never overdoing it and demonstrating the slow decline.
As the plot thickens the friends are join by Ernest and Cookie, David Lockwood and Lindy Le Cornu. Lockwood seems to play the voice of reason, lost in the chaos. Le Cornu is her usual well-rounded character but with highly amusing back problems. The final guests, Glenn and Cassie (John Koch and Leanne Robinson), complete the mayhem.
Andy Winwood and Ashleigh Merriel, as the two police officers, complete the cast that work together as a fine ensemble. Even though it is an ensemble cast there is a standout, Andrew Clark, who develops his character with care and it culminates in an incredible monologue which is outrageously fantastic but he delivers with conviction.
Kudos should go to the set building team for a well-designed set, which worked to aid the flow of the production, and to Ronda Shepley for the lovely costumes. Don't miss this one, another Galleon success!
Reviewed by Fran Edwards

What would you do if you showed up for your best friends 10th Wedding Anniversary dinner at their house only to find that the hostess has mysteriously disappeared, the planned meal is still frozen and defrosting on the kitchen table, and the host is discovered upstairs in his bedroom with a gun in his hand and a bullet hole in his ear?
The solution to these predicaments is the basis of Neil Simon's uproariously funny farce, Rumours (the British version, hence the correct spelling). The play is not a farce in the usual mould of scantily clad ladies, double entendres and vicars dropping in unannounced (and divesting themselves of their vestments). Instead it is a hilarious romp involving attempted solutions, confusions, rumours, bad backs, blood noses and bashed-up BMWs.
This reviewer has to admit to a very soft spot for this play, having directed the Adelaide premiere of it for Burnside Players many years ago. Under the always smart and reliable direction of Kym Clayton, Galleon's current production brought back many fond memories and many, many gales of laughter from me.
To have a successful production of this play, it must be fast - which this version is, most of the time - and have a wonderful ensemble cast - which this one has all of the time.
Peter Davies (Ken) is 'deaf'ingly delightful; Anita Canala (Chris) is delightfully drunk, along with her somewhat clueless cohort, Linda Lawson (Claire); as Len, Andrew Clark is at his bombastic best.
The always lovely Lindy LeCornu is charmingly calamitous as Cookie (who cooks), and fits well with David Lockwood as her husband Ernest, perfectly playing a psychoanalyst. The couples are rounded off nicely by John Koch as pompous politician, Glenn and Leanne Robinson as his wife, Cassie, not so calmly clutching her crystal; and so that the denouement of the play may occur, Andy Winwood and Ashleigh Merriel play puzzled police officers fairly convincingly.
For a riotous night out, listen to all the gossip and rumours of how great this production of Rumours is - they are absolutely TRUE!!
Reviewed by Brian Godfrey

American playwright Neil Simon wrote his first farce, Rumors, when his marriage was breaking up in the 1980's. It is interesting therefore that the farce he created involved a group of married couples and the theme revolved around a wedding anniversary.
Simon's subsequent British version of his comedy, Rumours (note the different spelling), is the one Galleon Theatre Group is now premiering in Adelaide. The popular local theatre company has developed a very fine production indeed, filled with dry humour, wit and well-drawn characters.
Four sophisticated married couples arrive in cocktail attire at the upmarket home of prominent government official Charley and his wife Vivian. They expect to help the two celebrate their tenth wedding anniversary. Instead, Vivian is nowhere to be seen and Charley is in a bad way somewhere upstairs, having shot himself through an ear. There's blood, the servants are not on duty and no food has been cooked for dinner. As they try to protect the reputation of yet-to-appear Charley and also leave their own careers unscathed, the eight party guests find themselves in a hilarious whirlwind of unlikely events, increasing drunkenness and no end of concocted explanations.
It is a delight to watch the story unfold on Galleon's perfect set, a room that oozes the comfort and sophisticated lifestyles that couples such as these exist within. When things begin to unravel and powerful people lose the capacity to control outcomes, everything seems even funnier in such a realistically upper-class setting. It is also good to see a farce in which the set walls don't wobble when the action moves vigorously in and out of doors.
Supported by a mostly highly experienced cast, Director Kym Clayton keeps the action at hectic pace, particularly in the first act.
Anita Canala is outstanding as Chris Bevans. She has wonderful comic timing. Canala gives one of the best performances of someone growing more and more amusingly inebriated that I've ever seen on stage. There is subtly in her performance as well as hysterically funny moments. Peter Davies is very good as Chris's husband Ken and particularly funny when Ken temporarily loses his hearing.
Giving Anita Canala a run for her money in terms of stealing scenes is Andrew Clark as Len Cummings. His final monologue of desperately imagined explanations is terrific. It gained spontaneous applause on opening night. Linda Lawson is delightful as Len's wife, Claire Cummings.
David Lockwood is wonderful as the therapist Ernest Cusack, while Lindy LeCornu is absolutely hilarious as his wife Cookie.
John Koch is terrific as Glenn Cooper and Leanne Robinson is suitably venomous as Cassie, his wife.
Andy Winwood does a very good cameo as Officer Conklin. Ashleigh Merriel has good stage presence as Officer Casey, but needs to increase her volume.
Costumes and hairstyles are excellent. Lighting is very well done, including realistic headlight effects as cars arrive at the house. Sound design is also strong.
Galleon Theatre Group invariably puts on high quality comedies, but the company's production of Rumours is a quite a standout and definitely not to be missed.
Reviewed by Lesley Reed

The Marion Cultural Centre houses the Domain Theatre which is a gem and home to the Galleon Theatre Group. Their current offering, Rumours, written by Neil Simon is a delight. Director Kym Clayton has chosen the version re-written for a British audience as opposed to the American version. Under his skilful direction the characters have achieved the perfect balance which prevents farce becoming improbable and ridiculous.
The characters have some delicious dialogue with which to work and they make the most of it. Anita Canala delivers an immaculate performance as Chris, the wife of Ken, who gradually becomes more inebriated as the plot unfolds. She has some wonderful lines but it is her unfaltering physicality which impresses. Linda Lawson as Claire faultlessly delivers some of the best and slickest one-liners as she also masters the gradual deterioration into inebriation. Andrew Clark as Len, Claire's husband, delivers the hilarious monologue which in essence summarises the plot. This is a highlight of the show and a sheer delight. The whole cast work wonderfully as an ensemble and make the most of Simon's dialogue.
Set design and construction is immaculate and a credit to the hard-working team. Costume coordinator Ronda Shepley has sourced elegant costumes befitting an anniversary party which brings the group together, even though we never actually meet the husband and wife whose anniversary is being celebrated.
Congratulations should go to everyone involved in this production. The season runs until 28 November.
Reviewed by Janice Bailey 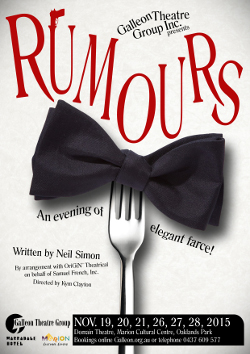