Shady Business centres on Mandy and Tania, two dancers working at a club owned by Mandy's boyfriend, Big Mack, who is one of the biggest crime bosses in the area. Mandy, however, has fallen in love with another man, Gerry, a city broker she met at the club. Complications ensue when Terry, a new henchman, arrives with the weekly take from one of Mack's businesses. The money is short and the boss is on his way to collect. Now Mandy and Tania don't just have to hide Gerry, but also have to hide the missing grand and keep Mack and his muscleman - Dozer and the local loan shark - Harry the Hammer - from finding out the truth. This is where the fun begins and what follows is a roller coaster of crazy events and mistaken identities that don't stop until the last side-splitting conclusion. 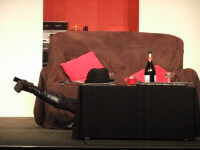 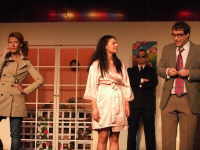 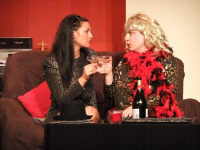 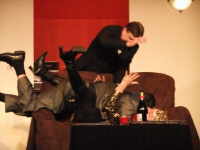 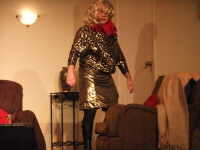 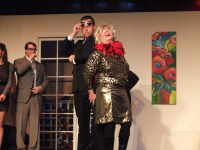 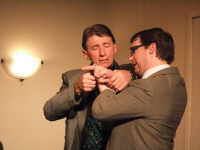 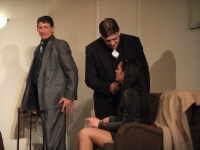 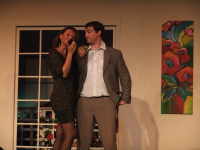 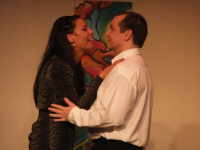 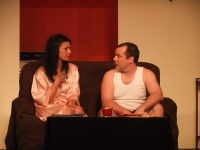 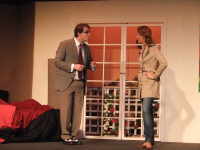 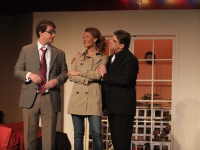 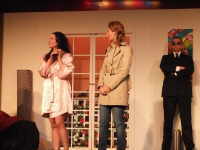 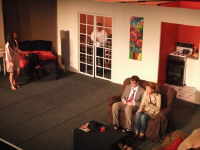 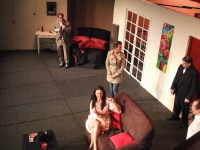 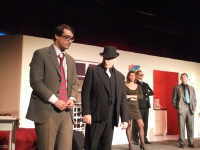 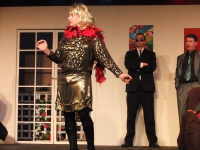 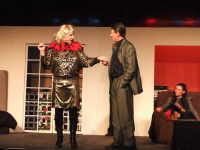 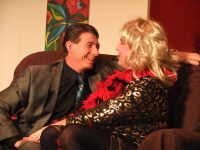 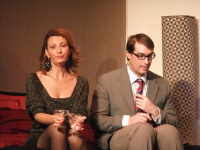 Robin Hawdon's fairly modern comedy has most of the hallmarks of classic British farce (minus six or more doors), mistaken identities, double entendres and innuendo, cross-dressing and the odd gay insinuation. What is new and different here is the involvement of mafia-style thugs.
The script, however, is strange in that, for the most part, it rockets along, but every now and then seems to lose itself for a few moments (e. g. using the term 'poofter' instead of 'gay' seemed to have an unsettling effect on the opening night audience).
Warren McKenzie's direction seems to mirror this strangeness by keeping the pace at a good speed and then stopping it by having cast members come to the front of the stage, delivering dialogue straight to the audience, almost as if it were a Shakespearian soliloquy.
Set designer, Steve Kelly, has caught this malady as well, with his London studio apartment set: stunning in the bedroom and kitchen areas, but presenting the rest of the box set in stark white. Not only is this uninteresting to look at, it also presents problems for lighting with various 'hot' and 'cold' spots on stage.
All that being said, the cast is consistently good. Luke Budgen is hilarious as 'perfect plonker' Terry, never missing a laugh line or physical joke. He is given a run for his money though, (particularly in Act Two) by Anthony Clapp as innocent dupe, Gerry.
Stage newcomer, Olivia Eblen does well as main girl Mandy, but should stop playing with her hair all the time. She also needs to watch the speed and pitch of her dialogue, as does her cohort, Sharon Pitardi (Tania). Both girls use East End accents and do it quite well, but Cockney can tend to become whiney and garbled if not kept in check.
As over-sexed Harry The Hammer, Malcolm Walton livens up Act Two by giving a nicely honed comic performance; while Stephen Small, as bodyguard Dozer, proves that one can almost steal a show by doing and saying very little. Gary Harrison certainly looks the part of fearsome gangland boss, Big Mack, but needs to be more terrifying. His overall stage craft, though, is good.
An entertaining production which makes for a fun night out.
Reviewed by Brian Godfrey

Playwright Robin Hawdon, best known for the West End success The Mating Game, finds the funny side with this 2004 British comedy. Two girls, two guys, a crime boss, a couple of thugs, an affair, mistaken identities and missing money all make for crazy fun. Not quite a farce but close.
Director Warren McKenzie did a great job keeping the pace moving, which is essential for this type of production. The blocking made the best use of the stage and the well designed set by Steve Kelly. Lighting design by Ray Trowbridge and operation by Kerry Cooper was spot on. Sound design and operation by Sean Smith was very good with an excellent choice of music, especially for interval. Costuming by Andrew Clark, Elizabeth Topperwein and cast was nice.
Olivia Eblen was impressive as the crime boss's girlfriend Mandy, considering this was her stage debut. She handled her few long and fast passages of dialogue with ease and great style much to the pleasure of the audience, who applauded each time. Well done, Olivia and good luck in future roles!
Gary Harrison was outstanding as Mandy's boyfriend and crime boss Big Mack and he really looked the part. As did Stephen Small as his side-kick Dozer who had a relatively easy role of standing tall and still in the background. However the few lines he had were delivered well. Sharon Pitardi was very good as Mandy's friend and dancer Tania.
Anthony Clapp had a big task playing the single role of Mandy's lover Gerry, Tania's boyfriend Larry and dressing in drag as Laura. He handled this well considering the many consume changes but he wasn't quite convincing as Mandy's lover and his laugh was creepy rather than sexy. Malcolm Walton was convincingly creepy as loan shark Harry the Hammer. Luke Budgen's role as unlikeable lad-about-town Terry would have been difficult to play without overacting. He didn't quite achieve this in the first half but got there after interval.
Reviewed by Kerry Edwards

Robin Hawdon's farce is filled with all of the things that farce lovers could wish for, false identities, people who are not what they first appear to be, people pretending to be other people, people hiding from others, confusion, mayhem and a huge bundle of laughs. Directed by Warren McKenzie, the pace is kept fast to take full advantage of all of the fun that this script offers, and he doesn't miss an opportunity to tickle the ribs of the audience.
Mandy has overslept and realises that crime boss, Big Mack, is due at any moment to collect the money from a number of his businesses, each in an envelope that Mandy collects for him. The big problem, however, is that she is in bed with Gerry, whom she met the night before at Big Mack's club, where she is a dancer. This is a problem, of course, because she is also Big Mack's girlfriend. Tania, another of the dancers, arrives first and Mandy enlists her aid in a deception aimed at fooling Mack. Big Mack arrives with his bodyguard, Dozer, nicknamed appropriately after a bulldozer; a man of few words and many muscles. Then the ineffectual lad, Terry, arrives with another package of money from one of Mack's businesses, but it is £1,000 short. Terry owes that sum to Harry the Hammer, a loan shark employed by Mack. From here the plot twists and turns incessantly, lies compound lies, and deceptions build at every moment until the final double deus ex machina sorts everything out.
Olivia Eblen plays Mandy and gives us a lively characterisation that successfully conveys both the excited young woman in the first flush of love and the street smart lass with a devious mind. Eblen's nicely played version of Mandy could charm the pants off of you and, in Gerry's case, she does. Anthony Clapp takes the role of Gerry, giving us a rather care-free young man who, although he tries to avoid any direct confrontation, likes to stir the pot, reminding one of a young Arthur Daley. Sharon Pitardi plays the put-upon friend, Tania, reluctantly dragged into Mandy's mess. She portrays all of the confusion, occasional panic and a certain amount of surprise as the situation develops, as you will see when you attend. Luke Budgen is the hapless Terry who, aside from all of his other dilemmas, falls for Tania, who finds him about as attractive as a case of dysentery. Budgen clearly has lots of fun with this role, getting all of the laughs he can find in every situation
Gary Harrison is the Napoleon of crime, Big Mack, smartly dressed and clearly in command thanks to Harrison's strong stage presence and powerful characterisation. Stephen Small is ideal in the role of Dozer, looking as though he would be quite capable of flattening anybody, or anything that got in his way with one punch, and no qualms. Malcolm Walton also does well in the role of Harry, creating a nicely balanced comic character who apparently has little compunction about coming down heavily in his dealings with debtors and is highly Chauvinistic in his treatment of women. His attempt to woo a fair maiden is hilarious.
All, however, is not necessarily as it seems and there are quite a few surprises and revelations before the final curtain, along with loads of laughs. This production is full of energy and enthusiasm and is a good fun night at the theatre. If you book quickly enough to get seat at a table, you can take a basket supper and drinks to make it a complete evening. Even in the 'bleachers' drinks and nibbles, easily purchased at the bar/canteen, are permitted. If you need a good laugh you'll find one here.
Reviewed by Barry Lenny, Arts Editor, Glam Adelaide 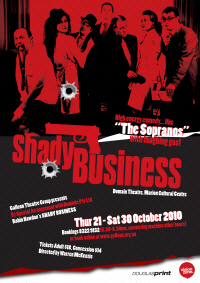 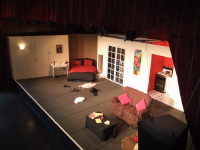