The Club by David Williamson, although first staged in 1977, is surprisingly reflective of many issues still facing Australian Rules Football teams: money rather than team spirit or tradition govern the management of clubs; coaches are sacked; administrators control decisions; players are bought for absurd sums; and bitter disputes are played out in the media. The main difference is the number of zeros after the dollar sign.
The play records the turning point in the 70's when VFL was heading to AFL, coaches were no longer ex-players from the team they coached and businessmen took over clubs.
This popular Williamson play encapsulates what thing he did best: write about Australian men engaged in macho competitive battles. Ted, the blustering President, conspires with his oily administrator, Gerry, and bully-boy board member, Jock, to replace ex-player/coach, Laurie, and to buy top players in order to win the club's first premiership in 19 years. The club is riddled with sabotage, betrayal, backstabbing and resentment. If you want a secret kept do not tell any of these men.
The play is big, broad and very funny even if you know nothing about footy. 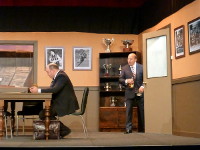 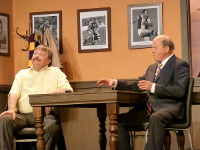 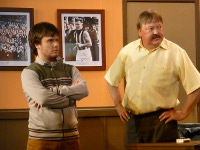 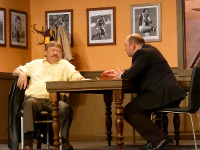 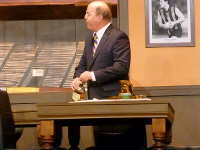 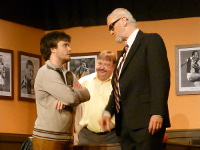 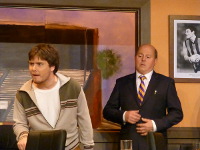 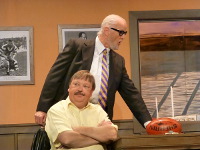 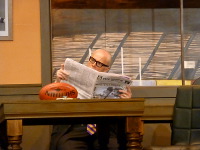 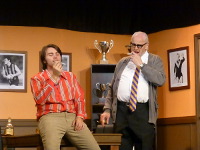 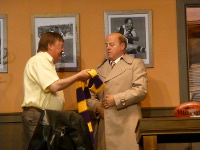 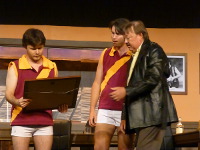 David Williamson's play about the politics of a football club may be showing its age a little, but the premise is still valid and the laughs are still there. Vicki Horwood has assembled a fine cast and drawn some fine performances from them.
Aldo Longobardi shines as Gerry Cooper, the gun administrator, whose duplicity is limitless and for whom honesty, or fair play, will never get in the way of a good deal. Peter Smith is odious as the president, Ted Parker, who treats the club as his own grandstand and believes himself to be above any law.
Warren McKenzie plays the coach, Laurie Holden, desperate to win a premiership with a team that has seen better days. Myles Teakle is the earnest and loyal Danny Rowe who is coming to the end of his career as a player. Teakle imbues him with a credible doggedness though the idea of him as a centre stretches the bounds of credibility.
Andrew Horwood delivers another great character in Jock Riley, past club champion, past coach and present board member whose goal is the presidency, come hell or high water. His comic timing is, as always, spot on.
Hal Bruce is Geoff Hayward, the star player purchased at great expense. His is a portrait of cockiness born of talent and Bruce channels more than a little of the Warwick Cappers.
The cast certainly milks the laughs but does less well when the going gets serious and there are several scenes when the underlying pathos seems to elude the performers.
But it all makes for a very enjoyable night and Galleon looks set for another fine season.
Reviewed by Tony Busch

The Club is an iconic Australian play by Australia's most produced playwright, and as such is often treated with undue reverence. Galleon's production is a down to earth rendition of this well-written comedy.
The play takes place in the committee rooms of an Aussie Rules football club in the glorious 1970s, although if you take away the football references, it could be the committee rooms of any sport or recreational club with the usual petty politics. The characters are well written and this cast does them justice.
Peter Smith is Ted, the businessman president who has never played for the club and has all the bluster and front with the underlying vulnerability. Aldo Longobardi manages the slightly oily character of Gerry the club administrator with ease, and Warren McKenzie is a solid and believable Laurie, the coach. The strongest performance comes from Andrew Horwood as Jock, former club star, wannabe president and committee member.
The players are well represented by Myles Teakle as Danny, and Hal Bruce as Geoff, the very expensive new player who is not delivering the goods. In particular the 'smoking scene' between Horwood and Bruce works well.
The set is realistic and well dressed, looking out on to an oval that has been painted with great perspective. Kudos to the set design/construction team. Overall the play flows well but with some questionable blocking which creates a few awkward moves.
Galleon regularly presents good theatre and this production is no exception. Don't worry if you don't like or follow football, it will make you laugh anyway!
Reviewed by Fran Edwards October 31st 2013

One of the definitions of the word meeting is 'an assembly or gathering of two or more people for a specific purpose'. The Club, by David Williamson, uses many such informal and self-managed meetings to expose the wheeling and dealing & power struggles in this satirical play set in a late 1970's Australian Football Club Boardroom.
In Galleon Theatre's production, Peter Smith is a fervent Ted Parker, the Club president. His character's great passion and love for the game and the local club seeps through his performance.
Andrew Horwood has great comic timing as Jock Riley, the ex-coach. Complete macho-competitiveness dominates his drive to reach the top. Horwood uses his height well to be physically intimidating and is hilarious in a bonding scene with Geoff. Hal Bruce, as Geoff, comes on with attitude and a swagger. Flamboyantly dressed and brimming with self-confidence, he is the embodiment of the overpriced sports star. Aldo Longobardi keeps calm and cool as Gerry Cooper, the club's administrator. Businesslike, this is a man who thinks only of the money. There is only a hint of slyness, and this could have been projected more as Gerry works the 'success at any price' motto. Warren McKenzie executes the character of Laurie Holden well, as the coach desperately seeking a win. Myles Teakle is Danny Rowe, the football player's captain and ex club champ. Though lacking the physically of a football player, Teakle is feisty and brings out Danny's loyalties well.
This is a technically sound production and black and white photos of past players lining the boardroom walls give a nice touch to the set. There are great laughs to be had, more so as the second act unfolds and a love of football is not really necessary to enjoy this production.
Reviewed by Sharon Malujlo

The Club, David Williamson's satirical play about a 1970's VFL Australian Rules football club, still resonates with audiences today because its bitter backroom dealings, power struggles and the personal foibles of players and officials remain real-life issues in the current AFL era.
Galleon Theatre Group's production of the play has much to offer audiences, in particular the performance of Andrew Horwood as Jock Riley. Horwood is screamingly funny as he embodies a man intent on vindicating his own passionate belief that he is the best player, coach and official the club has ever had. Peter Smith shines as club president, Ted Parker, a man passionate about a game he has never played and desperate to justify his position by winning a premiership. Warren McKenzie produces a strong performance as the proud coach, Laurie Holden. In probably the most difficult role in the play, Aldo Longobardi downplays administrator Gerry Cooper as a pleasant bloke doing a decidedly dirty job. However, Gerry has his own agendas and Longobardi could let a little more of the manipulative Gerry shine through. As he struts the stage as a larger than life stereotype, Hal Bruce looks like Warwick Capper without the bleach. This is a very funny portrayal of Geoff Hayward, the talented footballer who has discovered women and dope are his true passions. Myles Teakle produces a genuine performance as players' representative, Danny Rowe. Despite Williamson's very wordy script, Director Vicky Horwood keeps the pace tight, particularly in the second act. Galleon has produced an entertaining production of The Club, staged on an ideal boardroom set, where the walls are decorated with the photos of players and officials who, in more ways than one, have long since played their best game.
Reviewed by Lesley Reed 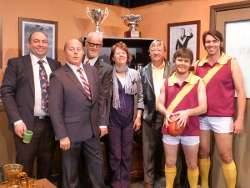 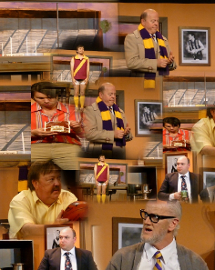