The Prisoner of Second Avenue

Mel is a well-paid executive of a high-end Manhattan firm, which has suddenly hit the skids, and he gets the axe.
His wife Edna takes a job to tide them over, then she too is sacked. Compounded by the air-pollution killing his plants, and with the walls of the apartment being paper-thin, allowing him a constant ear-full of his neighbors' private lives, things can't seem to get any worse...Then he's robbed, and his psychiatrist dies with lots of his money.
Mel does the only thing left for him to do - he has a nervous breakdown. It is on recovery that we come to esteem him all the more, because Mel and his wife and people like them have the resilience and the grit to survive.

When you go to see a performance by Galleon Theatre Group, of a play written by Neil Simon and directed by Kym Clayton you are reasonably assured of an entertaining evening, and it was.
The play is set in New York in one of those high-rise apartments and the occupants; Mel and Edna Edison are subject to the everyday pressures and annoyances that plague most of us. Mel is losing his job; Edna is trying to cope with the effects and life is not what they may have hoped.
Andrew Clark puts in a strong performance as Mel. His accent is a little too strong at the beginning but this settles and his characterisation is spot on. As Edna, Sharon Malujlo has a difficult personality to convey but does it well. She is compliant and eager to please but reveals herself as the strong partner when she becomes the breadwinner. The interplay of these characters carries the comedy, and as in many of Simon's plays allows him to demonstrate his understanding of the human condition.
The minor parts, Mel's brother and sisters (Jewish mamas) are skilfully realised by Harry Dewar, Ashleigh Merriel, Anita Canala and Leanne Robinson. They show the affection and foibles that permeate most families.
On another excellent Galleon set with good lighting by Luke Budgen, which complemented the costuming by Trisha Graham. This was as I said an entertaining evening.
Reviewed by Fran Edwards

The Prisoner of Second Avenue concerns a middle-aged couple who have an apartment in New York in the seventies when New York had the highest crime rate in the world, rising unemployment in addition to common city problems of noise and smells assaulting the senses. Mel (Andrew Clark), suffers the hardship of losing his job and is unable to find other work, complaining that no one wants to employ a fifty-two-year-old man. His wife, Edna (Sharon Malujlo), returns to work as a secretary to help pay the bills. In the meantime, Mel's mental health is steadily deteriorating and everything in life is becoming too much for him, including the neighbours!
This depressing backdrop provides Neil Simon with many opportunities to uncover the hidden humour through his superior powers of observation.
Director Kym Clayton keeps the pace up, on the whole, and ensures the actors use their physicality to underline the emotional rollercoaster of their changing situation. Clark delivers a fine performance; his frustration and bewilderment are palpable and supported by great facial expressions. Malujlo is simply excellent and compliments Clark perfectly, producing a brilliant double act. Their accents are on point and consistent in quality.
Set in Edna and Mel Edison's living room, act one sees a plethora of gags delivered with wonderful comic timing. The second act loses this comic focus as it concentrates on Mel's breakdown and the arrival of Mel's siblings Harry, Pearl, Pauline and Jesse. These characters are well portrayed respectively by Harry Dewar, Ashleigh Merriel, Anita Canala and Leanne Robinson but this is nevertheless the weakest scene due to the material being stale and predictable, and the pace losing the snappiness of the action to this point.
The set is static but the attention to detail a credit to designer Trisha Graham and her talented team. Lighting by Luke Budgen is also notably effective.
The audience were clearly entertained throughout and babbled excitedly as the curtain came down. This reviewer usually anticipates a good night out at Galleon and once again they have delivered.
Reviewed by Trish Francis

Mel Edison is a middle-aged, middle-class advertising account executive and he is having a very bad time. His employer is on the verge of bankruptcy. His 14th floor apartment is cracking and he can't sleep because the air conditioning is faulty. Through the paper thin walls he can hear his neighbours' romantic encounters and he can't open the windows without being overwhelmed by the noise and smell of downtown Manhattan.
When Mel loses his job and gets robbed in the same week he loses his ability to cope and becomes a prisoner in his Second Avenue apartment, pacing the walls in his pyjamas and listening to talk back radio for hours on end. He believes that there is a conspiracy afoot, "The deterioration of the spirit of Man. Man undermining himself, causing a self-willed, self-imposed, self-evident self-destruction!".
Written in 1971, Neil Simon's play The Prisoner of Second Avenue still resonates strongly today. Earlier this year the Organisation for Economic Co-operation and Development (OECD) released a report entitled Under Pressure: The Squeezed Middle Class, which, oddly, could be a suitable alternate title for this play.
You could be forgiven for thinking that this play sounds rather more like a tragedy than a comedy but that is not the case. Neil Simon's script is peppered with witty dialogue and one-liners. Andrew Clark gets the lion's share of the droll zingers and really makes a meal of his role as Mel Edison.
As his wife Edna, Sharon Malujlo has less to work with in the script but is superb as we watch her try to care for her husband through his crisis, only to slowly descend into her own.
The second act introduces us to Mel's four siblings who have arrived at the apartment to commiserate his state of mental health and offer support to Edna, from whom they have been estranged for many years. It seems a slightly odd moment to introduce the new characters to the piece.
Nonetheless veteran actor Harry Dewar as brother Harry and Ashleigh Merriel, Anita Canala and Leanne Robinson as the sisters offer some very funny moments as they grapple with their differing childhood memories and their desire to be seen to 'do the right thing'.
Trisha Graham has designed both the set and costumes to be true to the 1971 origin of the play. She has created a very workable space for the action, complete with balcony and views of New York, with scenic painting by Brittany Daw. The furnishings and dressings are superb examples of 1970s kitsch, even down to the small details of the coffee pot and other tableware.
Luke Budgen has lit the action well, with the exception of some awkward shadows on the New York streetscape and some poorly placed bright lights in the eyeline of the raked seating.
Director Kym Clayton has carefully selected some popular music from the period to segue between scenes and acts as well as pre-recorded 'news' segments which he voiced, along with fellow Galleon members Bronyn Ruciak, Luke Budgeon, Lindsay Dunn and Maxine Grubel.
Clayton and the Galleon team give a highly polished and entertaining night out with this Neil Simon classic.
In some ways the ending Simon wrote for The Prisoner of Second Avenue feels a little inconclusive, but that leaves us to imagine where Mel and Edna's life took them next, and to hope for the best for them. Go and see the play to decide for yourself where life may lead them....
Reviewed by Jenny Fewster

Despite mixed reviews of its time (1970's) The Prisoner Of Second Avenue has much to offer modern audiences, and Kym Clayton's production of the play makes that perceptively clear.
The plot concerns a middle-class man Mel Edison (Andrew Clark) who lives in a small New York apartment with his wife Edna (Sharon Malujlo), and who has just been fired without apparent reason after working for the company for twenty odd years. Mel and Edna struggle to survive in a world that Mel believes is conspiring against them. He hears these political arguments on radio bulletins and so makes assumptions that they are correct. To make matters worse, Mel undergoes a nervous breakdown, which forces wife Edna to get a job.
New York in this period was going through much turmoil and economic hardship not unlike perhaps conditions today and Clayton's production highlights this theme of the protagonist Mel struggling to find a place in a declining corporate world.
The story is set in a cramped 14th floor New York apartment, decorated with 1970's orange walls, designed by Trisha Graham which worked well on the narrow Domain Stage. At the back of the room we can see that the apartments around them are higher than Mel's and Edna's which of course only exacerbates Mel's depression brought on by the loss of his job, the on again off again water, bad food, a robbery, a city wide garbage strike and other nagging, numerous domestic breakdowns. We follow Mel and Edna's fight against the forces that they feel are operating against them.
Andrew Clark and Sharon Malujlo, with (almost) impeccable Bronx accents are each at the top of their game as they deal with distractions that to us may seem petty but to these two are accumulating and crushing them. We laugh at their rapid-fire dialogue, yet our laughter is tinged with darkness. Will they survive the almost daily domestic crises that seem to dog their every move? Andrew and Sharon work wonderfully well together, seeming to spark off each other with consummate skill. Here we have two experienced performers under the steady hand of expert director Clayton.
With help from their family, brother Harry (Harry Dewar), and widowed sisters Pearl (Ashleigh Merriel), Pauline (Anita Canala) and Jessie (Leanne Robinson) Mel and Edna decide they can fight the world together. These four members of Mel's family are not introduced by the playwright until the second part of the play which makes for a rather odd plot construction. We don't see a great deal of these characters who eventually help Mel and Edna, and who provide some clever comedy while helping their brother. However their discussions (in not such impeccable accents) as to how they shall recompense Mel and Edna provide more laughs. The four family members also work well together with Mr Clayton melding his performers into a strong ensemble.
Reviewed by Richard Lane

Batten down the hatches for a storm of human emotions.
See the full review
Reviewed by Jenny Pickett

"The Prisoner of Second Avenue", Galleon Theatre's latest production at the Marion Cultural Centre, owes everything to two remarkable, faultless performances from Andrew Clark and Sharon Malujlo. In the hands of lesser actors, this production would fall apart, because they completely 'carry' Act One, as a New York couple tackling a husband's unemployment, with his resultant loss of self-esteem, plus a sickening robbery.
Sadly, this isn't one of playwright Neil Simon's best works, seriously lacking his usual sparkling wit. Nevertheless, there's enough to hold your attention throughout.
Strong Support comes from the excellent Harry Dewar, plus Anita Canala, Ashleigh Merriel, and Leanne Robinson, who disappointingly only appear in one major scene towards the end!
Full credit also to director Kym Clayton, who, as usual, creates an impressive production, aided by a spectacular set.
However, if there's one point to remember it's never to live in a noisy high-rise apartment! Until Saturday 8pm. GO!
Reviewed by John Ovenden 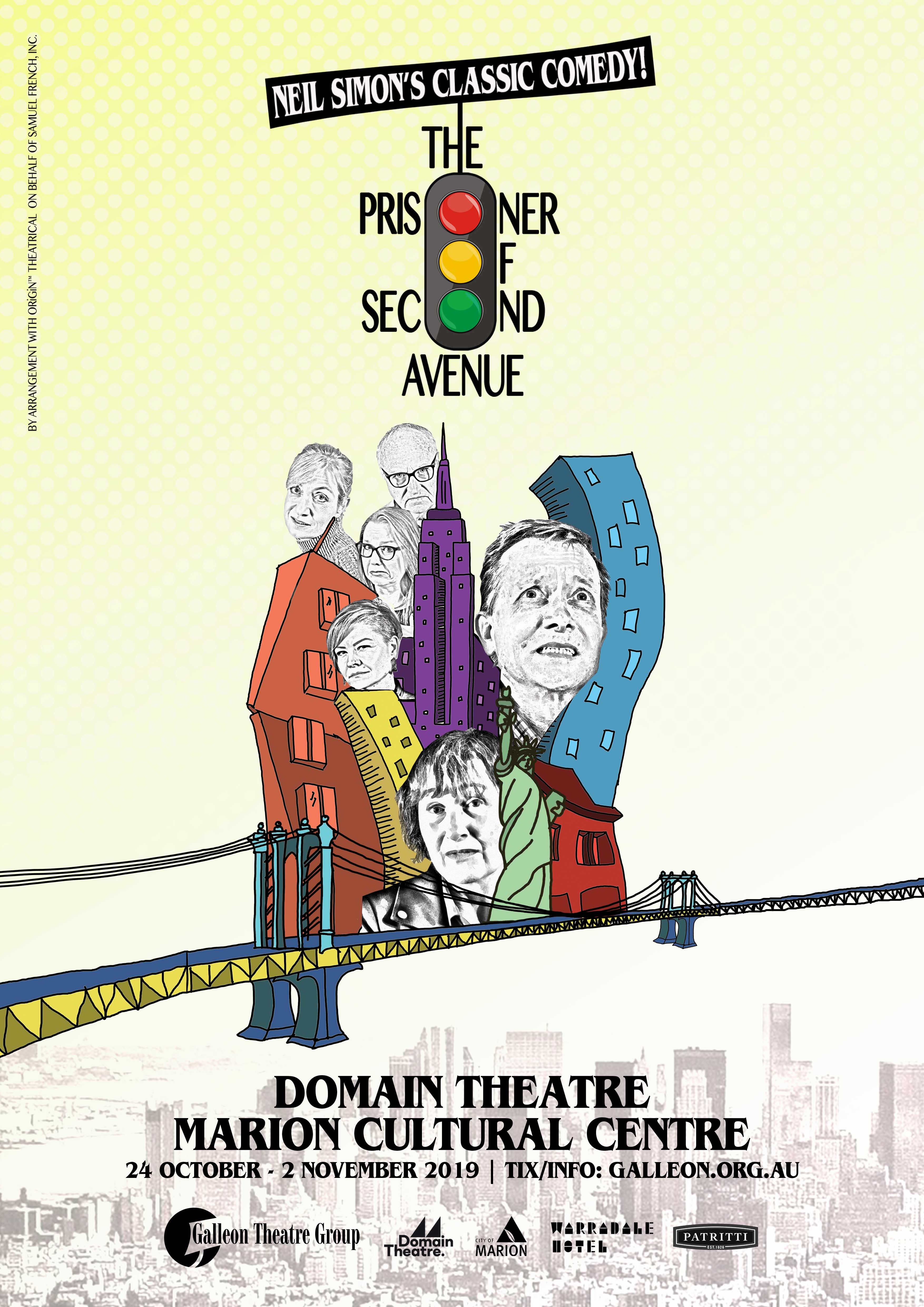 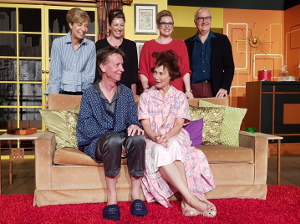